We have been offline for the past three days since the wifi at Wahana was out of order. Relief for some, pain for others. Three days of offline means that at check in to Swiss Belhotel Medan people got their iPhones out and got online. Not sure whether this is the (only) reason, but the signal here on 16th floor is so slow that it has taken 14 minutes to upload 1 (one) picture to Flickr – and it is not even done yet…. so here is a post without too many photos.

At Wahana we were accommodated into single rooms (field trip luxury) with private bathroom. By the presence of a football the group was divided into sweating boys – and sunbathing girls. Just like being home… 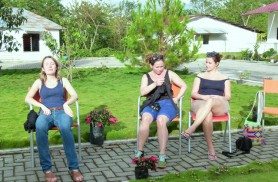 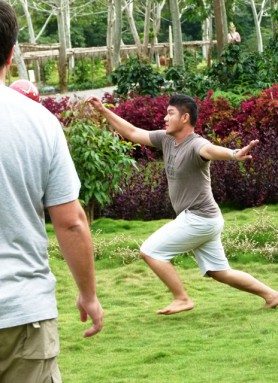 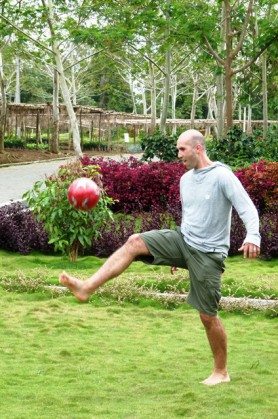 Mukfin going for it… while Steve is doing it the Aussie way.

The main harvest at Wahana is from October to December and the fly crop is March to May. But due to change in the climate here, the harvest time is moving backwards.

Next morning we met Cornell Tobing, agronomist who showed us the Wahana nursery. For the nursery they choose only red ripe cherries and plant them. 80 % of them turn into seedlings. The little seedling is 3 months and the plant in the poly bag (30-35 cm) is 10 months. 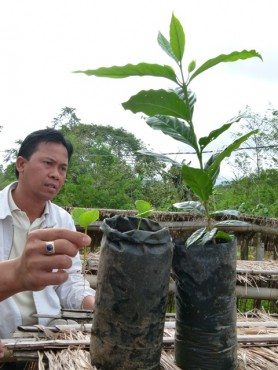 At the mill we were explained the processing of the coffee which is quite a study itself. Apart from natural coffees and washed coffees there is a “local method” which is widely used. After picking the cherries are pulped – preferably the same day. After that it is fermented in parchment for around 12 hours where after it goes onto patio for one day- or until it loses the stickiness. 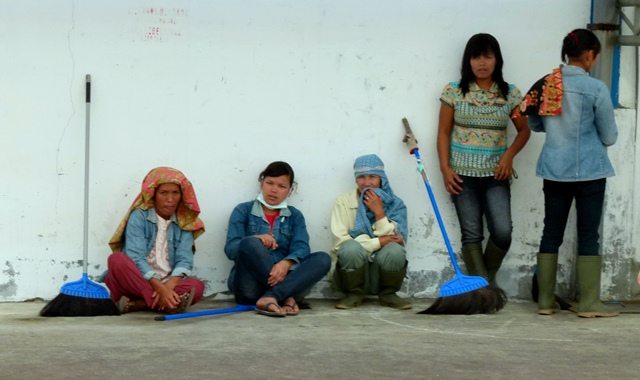 After hulling the coffee becomes “labu”, meaning wet grean beans. Moisture content around 30 %. Then they are dried for from 2-3 days (good weather) to one week (bad weather). Now the beans  become “asalan” and have a moisture content of 16-17 %. They are transported to the Medan mill and dried again until they a have 13 % moisture content. The green beans are also sorted here. Then ready for export.

At the mill they also have mechanical driers which are used for the natural coffee. The driers take 15000 liters. The natural coffee dries for 7 days (12 hours a day) in 35 degrees Celcius. The result is a rather amazing coffee cherry that looks like a long shiny hazelnut – compared to the normal raisin-look of a natural cherry. When visiting a one of Wahana’s local collectors of red cherries called Saragi.  When we came to the coffee trees   behind his house his mother was there picking coffee. She spoke English which she learned at the Medan university in the 60’ies. She invited us into their home to have a cup of “kopi”. 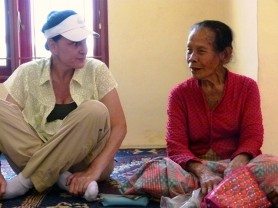 We had lunch at Lake Toba one day. There was a kind of a (very basic) put’n take concept – and Alexander and Anette were popular when they caught 10-12 fishes which were grilled. This was indeed a very beautiful lunch setting. On the way back to Wahana people were looking forward to a nice dinner. Michael who is on the trip is a chef at Europa Canteens. He has repeatedly spoken his delight with all the fruits and vegetables in Sumatra. It ended up with him staying at home (going to the marked, finding piglets and vegetables, cutting, barbecuing, arranging) and cooking for us. So when we came home we were met by this view. It was a fiest. Today we went to the site of the charity project that we collected money for at the NBC. Wahana is going to build a coffee school to educate coffee farmers in pruning, sorting, diseases and other. By cooperating with the regional government they will send out invitation to all farmers in the region.

The school will have quarters for the farmers who come from afar to stay and cook. There will also be a cupping lab. The total cost of the construction is 220.000 USD and during NBC we all gathered 11.000 USD. So there is a way to go yet. Two USAID funded organizations are going to run the school when it is finished. Mukfin who is in charge of the coffee school said that they will start construction this year. Here he showes us one of the possible to locations for the coffee school. After that we visited Mister Silalahi, who is a collector for Wahana. He has 7 groups of farmers with 30 farmers in each group. Each of these farmers has minimum 10 hectares of coffee trees. As we walked the coffee trees Silalahi explained about the situation with the Coffee Stem Borer. 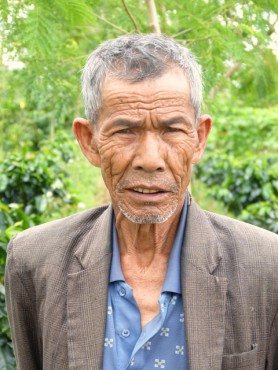 His father, Simbolah, owns the area where we were (1 hectare) and as we arrived he went straight over to one coffee tree and removed the top half of the tree. With his bare hands. 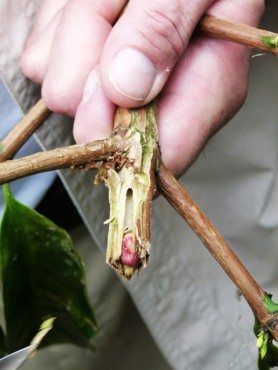 Inside there was a Coffee Stem Borer (reddish), a kind of caterpillar who eats its way up through the stem of the coffee tree and kills the plant.

Nice to know that at the Coffee School they will be teaching the farmers to see the signs of Coffee Stem Borer (yellow stains on leaves). So Simbolah and his son can get rid of the plague. 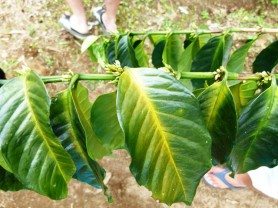 It has surely been some exciting days. Tomorrow we will see the Sarimakmur mill in Medan, do a cupping and at night we will finish off with a barista jam at the Opal Café, owned by Sarimakmur.

You can find more photos from the trip on the NBC Flickr profile.