A Lesson In Nordic Cuisine

So you understand by now that the mantra at the Nordic Barista Cup is learning by sharing, right? After a coffee break following Luis Rodriguez’s presentation of Café de El Salvador, attendees eagerly returned to the lecture area to hear from Mr. Anders Selmer, the owner of celebrated Danish restaurant, Noma, located just one building over from where the Nordic Barista Cup events have been taking place. 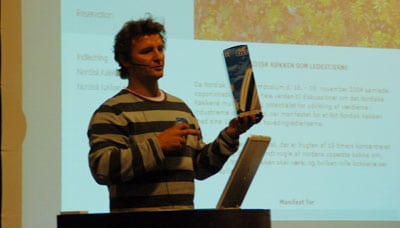 Why the eagerness? Noma is ranked the 33rd best restaurant in the entire world, and that fact is especially impressive considering the focus on the traditional Nordic cuisine served there, which in the past has been much maligned.

Rather than expound on the history of Nordic cuisine, however, Anders instead pulled out a large cardboard box, and announced to the teams and attendees that one of the most creative events of the entire weekend would take place with the contents of the box.

Reminiscent of the crazy ingredient competition held in Iceland at the 2004 Nordic Barista Cup, Anders told the teams that they would be judged on their ability to create coffee drinks using the many ingredients he had assembled in the box at a competition to take place on a public square in Copenhagen on Saturday, the final day of the event.
The contents of the box included ingredients gathered from all five countries represented here: Sweden, Finland, Norway, Denmark, and Iceland. 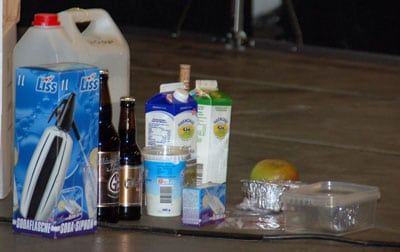 Barista teams must use their teamwork capabilities and creativity to come up with one drink to be served to two judges, including Anders, on Saturday. Competitors were also given a cocktail shaker, a Nitrogen canister and CO2, a knife, and a cutting board. They will be allowed to use steam and hot water, but no other cooking facilities, and the two drinks are to be served in paper cups. Teams will be judged on their ability to use as many ingredients as possible, and their success or failure at developing a drink that actually tastes good!
Anders left the teams with one hint: “When I go out for a drink, sometimes I get a little snack with that, so you can work with that.”
At least that might take care of the ham.
—Sarah Allen