Leave it to the organizers of the Nordic Barista Cup to put together the dream auction for a true coffee nerd. On the block were a variety of incredible products ranging from the small to the insanely big. Top prizes eager bidders kept their eye on included a new variety of portafilter with a Teflon coating, a trip to El Salvador to accompany the yet-to-be-announced 2006 NBC winning team at the first-ever El Salvador Barista Championship, a training session with former WBC champs Troels Overdal Poulsen and one with Fritz Storm, a session at the celebrated Danish restaurant, Noma, with the executive chef—the list of incredible items up for bid went on and on and on.

But there was one prize unlike any other, a prize we’ve been talking about ‘round the world since the conclusion of the WBC last May in Bern. It’s a goat. Yes, a goat. It’s 2006 World Barista Champion Klaus Thomsen’s goat (his trophy for winning), to be specific. 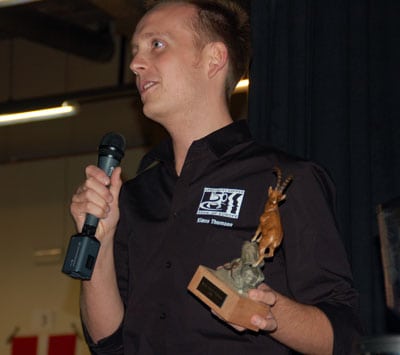 Klaus was generous and creative enough to donate his first place trophy to this auction raising money for the NBC Foundation, and many had their eye on the little wooden wooly from the start. Bidding began at 300 Euro and quickly rose to 600 Euro, a battle especially fierce between David Latourell of Clover and Jens Norgaard of Café Europa.
Though it was a silent auction, the bidding was so intense between these two that Martin Hildebrandt decided to up the ante and make it live. The crowd gathered at 3 p.m., the official end time for the auction, and bidding between David and Jens began at 600 Euro. On and on it went, until finally Jens proved the victor with a winning bid of 1000 Euro. 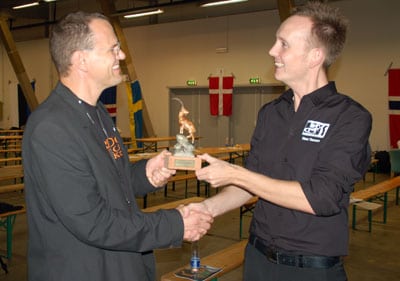 Can’t say that about many farm animals now, can you?