Any lingering questions competitors and attendees might have had about the Clover brewing machine were put to rest with a competition pitting the five Nordic Barista teams (joined by the Estonian team!) against each other brewing the El Salvadoran beans each had roasted that very morning on the Probatino. 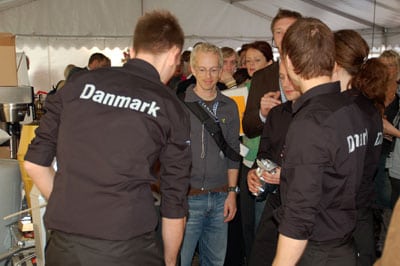 Their coffees had only a few hours to rest, of course, making the fact that the teams were able to evoke flavorful and complex roast profiles. Teams served to a group of judges pulled from the attendee pool.
Each team was given 10 minutes on one of two Clovers to adjust the grind, temperature and dose amount before serving samples of their roast to the judges. Ten judges were grouped in pairs to evaluate the roasts. As with the Noma ingredient competition, the winner of the Clover competition will be announced at tonight’s Gala dinner.
— Sarah Allen