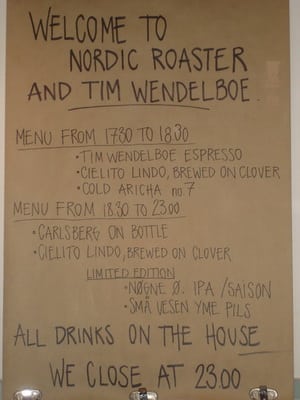 The Nordic Roaster began Friday 12th of September at 6 pm at Tim Wendelboe.

The vision of Nordic Roaster is to create a forum for roasters of the world to educate, inspire and share knowledge in roasting and related skills.

The first ½ hour was mingling time, spent with a wineglas with cooled Aricha no. 7. The taste is very berry and sweet.

At 6.30 there was a lecture about “Fire in your roaster”. First there was a presentation about Inergen gas, that can extinguish a fire in the roaster.

The lecture was held by Tor Eystein Hovda, that works with Fire-Eater Norway, the company that developed the Inergen gas. 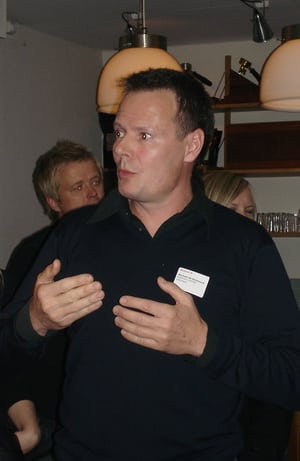 After that Michael de Renouard, from Kontra Coffee in Copenhagen told about his experience with a fire in his roaster.

Here is a section of Michael’s presentation:

Suddenly smoke came out of the roaster, the ventilation and cyclone. My colleague Troels came to the rescue and we stopped the roaster drum and the cyclone and started to pump water in the small “tryer” hole to cool down the roaster. We didn’t really know from where all the smoke came from.

I thought that the chaff collector under the cyclone might be on fire, so I grapped the water hose and opened up in order to extinct the fire. That was a mistake!

The fresh air intake nourished the sparks in all the beans lying around in the tubes and they ignited and burst into flames. The room was smoke filled and suddenly Troels shouted: “We have flames at the back of the roaster”.

Flames started licking the ventilation pipes. We tried to use the extinguisher, but it was difficult when the fire came from within the pipes. We could only cool the red hot pipes from the outside and it didn’t help much. 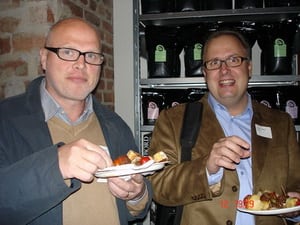 After the smokey lecture people were thirsty and hungry.

On the photo to the right it is Matts Johansson from da Matteo in Gothenburg, Sweden and Krister Kattari from Paulig in Helsinki, Finland enjoying tapas and a chat.

Paulig came in 2nd in the Nordic Roaster 2008 with a single origin Kenya AB+, fully washed. The coffee came in second.

Below it is Magnus Adamsson (left) from Espressospecialisten in Stockholm, Sweden talking to Stephan Diedrich from Diedrich Manufacturing.

Tim Wendelbeoes place was filled with people happy to see each other again.

55 people from 9 nations were attending the Nordic Roaster 2008. 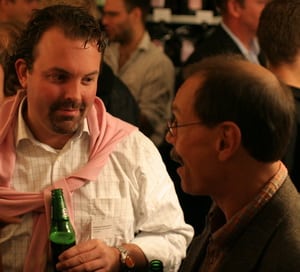 After a good morning croissant at Solberg & Hansen people were gathered in the roastery, where 6 cupping tables were prepared… not in the usual way with cupping bowls, but with 3 glasses (whitewine/ champagne/ redwine glass without the stem) and the traditional cupping bowl.

The 3 glasses had ingraved NORDIC ROASTER logo on them and people could bring a set home if they wanted to for cupping or as a souvenir. 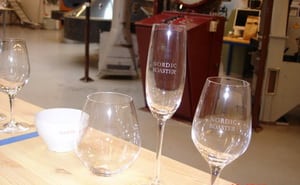 To lead the cupping was Anders Selmer, who works as a consultant for restaurant Noma** in Copenhagen.

Anders is the guy who developed the Noma box competition at Nordic Barista Cup 2006 in Copenhagen.
Here is a part of his presentation at Nordic Roaster 2008:

I have been tasting wine, and paired food and wine, for almost 20 years now. And fortuneatly been able to make it my living as sommelier at noma and other places and now as a winemaker.

Last year I travelled to El Salvador to learn about coffee. And many things struck me.
Most of all the fact that the coffee producer never has tasted his own product!!

Also I attended my first cupping. And at this first cupping 20 coffees were lined up in big cups in an open air room with fumes of fermenting coffee from outside. No good way to distingwish one coffee from the other.
I understand the logistic problems in El Salvador, but when I see the same tasting methods here in our part of the world, I’m thinking it could be better.

Maybe in El Salvador you can tell if coffee has the defects this way, but here we taste for the beautiful nuances, the upper qualities in the drink!
Therefore this little tasting, where we will taste coffee in 3 different glasses, all wine glasses, since the perfect coffee tasting/ serving glass isn’t developed yet.
Wine form: always goes in to concentrate the aromas, and then a bigger surface for airing the wine.
You can swirl in a glass to release aromas. Try a wine in a waterglass, a café glass and a good wineglass like these. You will feel an enormous difference.
I think it’s the same with coffee!
Let try a coffee you all know: a Colombian Guadaloupe in this big cupping bowl…the normal way.

The flute (Champagne galss)…the effect that brings the liquid in the back of the mouth and smoothens the acid.

The whitewineglass… that concentrates the aromas.

The redwineglass…that opens the taste.

After this first part of the tasting workshop people gathered in the canteen at Solberg & Hansen for a part called “Daniel’s kitchen”. 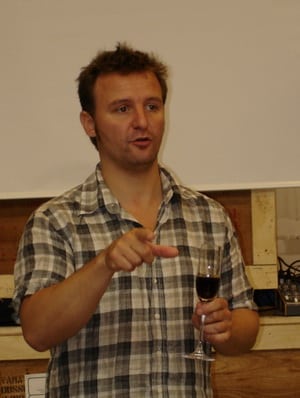 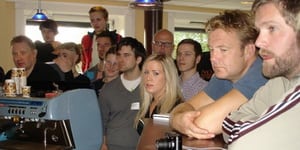 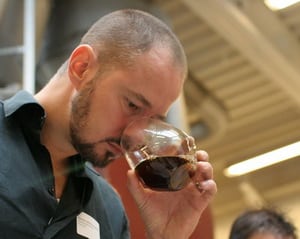 To inspire Anders had brought along Daniel Burns, who is souchef and pastry chef at restaurant Noma** in Copenhagen.

Here is a part of the introduction:

In the food industy there was not much new under the sun 20 years ago. We al made food the way the French had told us, unless we had a strong regional to mix with ‘haute cuisine’ Then came along Ferran Adria and made a Spanish movement that has led us to think very different in many ways – but still allowed us to be classic/ traditional.
Likewise I would like to introduce some new ways of coffee processing, but also underline that a good cup of coffee made by you guys, the traditional way, also always will have it’s place in the gastronomical scene.

We have made some different things, just to make you break some barriers on how coffee is served. These recipies are not perfect but meant to be worked at along with other new things.

And then Anders and Daniel started making a canapé with the kind of milk we normally want to avoid: the milkskin.

On the photo Daniel has successfully made a perfect milkskin that he would put together with a slice of roastbeef and a glaced beet root. 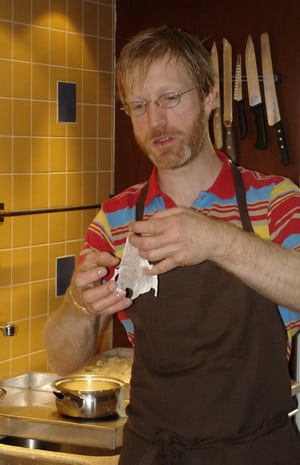 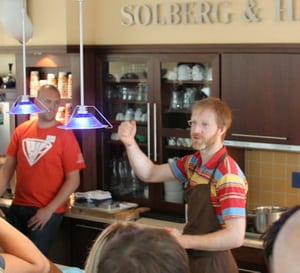 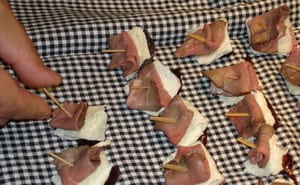 The mouthfeel of the roastbeef and milkskin and beet root was wery surprising. It felt like the three distinct tastes each separated to different regions in the mouth and stayed there for a long time. Interesting! 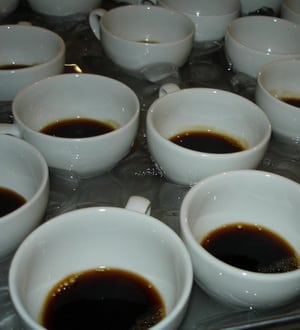 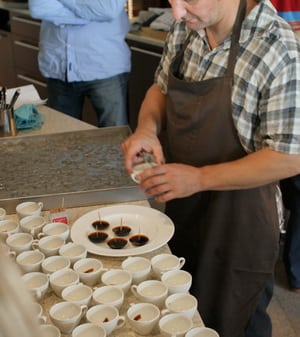 After the canapés the next thing was a warn coffee gel that they made from hot french press coffee (a 50/50 blend…. internal Nordic Roaster joke!) and poured into espresso cups in icebath (above).

After 3-5 minutes the coffee gel had set and could be picked up with a toothpick.
The taste left something to be wished for by beeing verry jelly-tasting, but the concept was interesting. 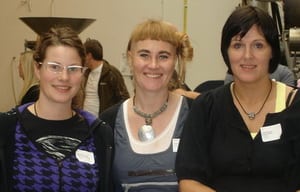 Imma and Sonja (left) will open Kaffismidja Islands in a very short while. To the right is Ragnheidur roast master at Kaffitár. 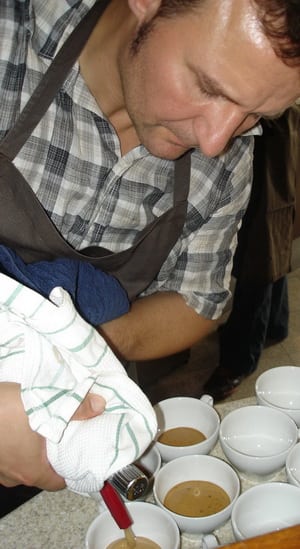 Next on the program was an educational cupping with the purpose of detetcting origin and processing. This cupping was set up as a competition between the 6 tables.
There were 6 coffees on the table and the teams were given 10 alternatives to choose between. 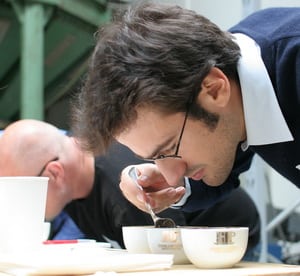 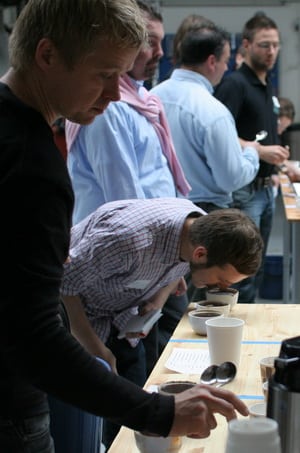 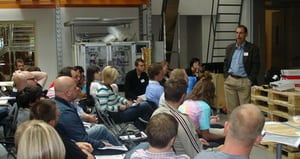 After lunch Stephan Diedrich from Diedrich Manufacturing held a lecture about how to improve and develop your roast.

After the lecture there was a cupping with Cielito Lindo from Honduras roasted in 4 different ways.

Again the cupping was a competition between the 6 tables. 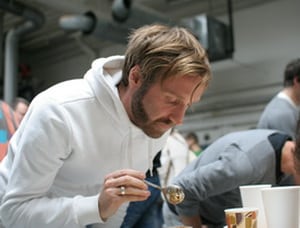 There were 4 coffees on the table and they had 6 alternative roast profiles to choose between.

On the left is Nordic Roaster 2008 winner Ola Brattås from Tim Wendelboe tasting his way through the roasting profiles.

Next thing on the agenda was the Nordic Roaster 2008 filter competition itself. Read the rules for the competiton here.

10 roasters signed up for the competition. You can see the results and cupping notes here. 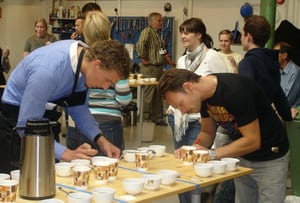 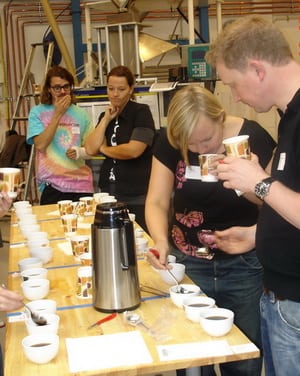 At 7 PM the Nordic Roaster ceremony was held at Kaiplass 10, a boat in the Oslo harbour. 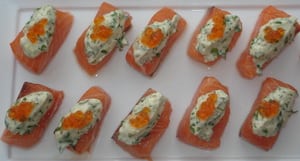 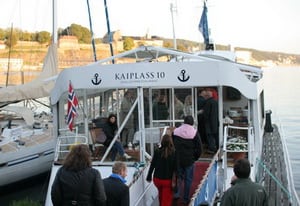 First there was canapés and champagne/wine and after that there was dancing, and cigar smoking on the deck.

To the upper right Matts Johansson from da Matteo (far right), Róaldur Jákupsson from Brell, Jens Nørgaard from Europa 1989 and Morten Wennersgaard from Solberg & Hansen are enjoying the nice weather outside on deck.

Below on right side is Stephan Diedrich from Diedrich Manufacturing and Søren Stiller and Stine Skouborg from the Danish National Team. 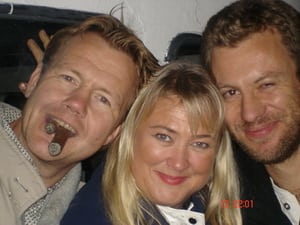 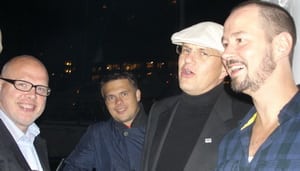 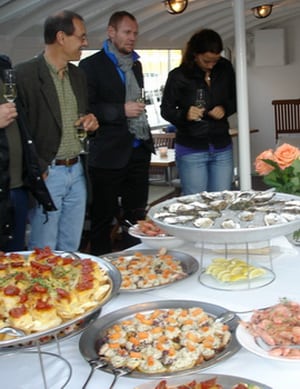