The Nbc’s In Jeopardy!

It’s the thinking baristas’ favorite game show: Jeopardy! And the stakes couldn’t be higher (well, unless the national teams were playing for real money anyway.) The host, Alexander, bounds to the stage and welcomes all six teams to the final event on Friday night, a coffee-themed game show where the answers are given and the contestants have to supply the questions. And yes, we did say six teams not five because for this competition, the indefatigable volunteers of the Estonia national barista team are invited to participate fully in the fun. 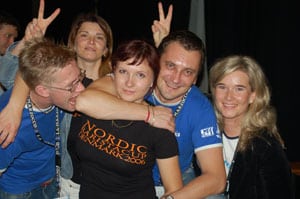 The contest is a recreation of the same event from last year’s NBC in Oslo, complete with the same judges, Tone Liavaag and Tim Wendleboe, Alexander acting as host, a sexy Vanna White-esque assistant, wacky sound effects to accompany the responses, and all of the barista teams doing their best to answer questions, or rather supply the questions, for answer given in categories such as “Coffee on the Screen,” “Processing,” “Who’s Who,” and “”Coffee History,” and we haven’t even reached the second round yet. 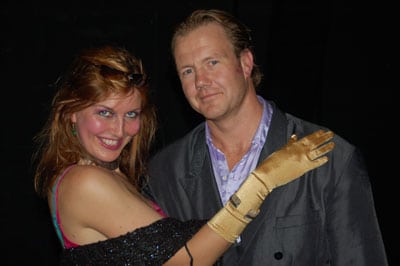 As the scores and questions are tallied on the big screen behind the stage, the teams seem to struggle a little through the first round. Clearly knowing the second round is on the way, where the values are doubled and the scores can really change is weighing heavily on the contestants’ minds. When the round draws to a close, only a few hundred points separate first from fifth place, though Iceland who insists on betting big when they hit the “Joker” question, a strategy which worked well for them last year when they won this event, has not come through so far and now trails badly. 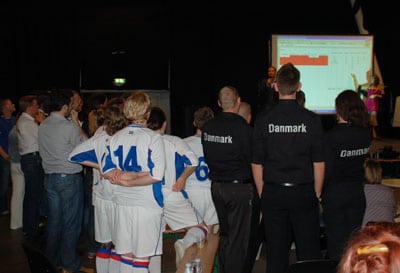 Still the second round doubles the number of points available, and anything’s possible. Furiously, the teams shake their noisemakers, and submit their questions to answer after answer. “The number of chromosomes in Arabica coffee,” Alexander says, and the Danish team is quick to respond with, “What is 44?” “Correct!” And they climb back into it, but still the onslaught from the Norwegians and Swedes is too much, and by the end of the second round, the three teams with negative amounts of points, Denmark, Iceland, and Finland are eliminated, leaving Sweden, Norway and upstatt Estonia to duke it out for the victory.

The teams make their wagers, and then chemical symbol for caffeine is flashed on the screen. Estonia and Norway both have the correct answer, but only one has enough points to win: Norway claims the Jeopardy! title and the team embraces and jumps for joy. Now that’s a game show and a great high note to close out the second day of the Nordic Barista Cup. 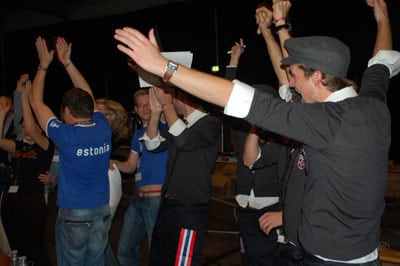 Tomorrow we meet in Nytorv in a public square to start the third and final day of competition. Let’s hope the weather holds and the rain won’t be a factor. Certainly, however, fun will be.
–Kenneth R Olson