The Boys From Brazil

After yet another terrific buffet-style meal (with a tiramisu desert that is simply out of this world) the attendees and teams take their seats in front of the stage and screen. The Norwegian national barista team is presenting slide show from their trip to Brazil, the grand prize for winning last year’s NBC. 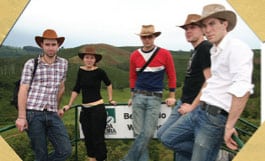 The team traveled to world’s largest coffee producing country to participate in the Cup of Excellence and help out at the national barista competition, and the slides they present surely must have this year’s team mouths watering in anticipation with a trip to El Salvador at stake here in Copenhagen.

The Norwegian team was very excited about a visit to a coffee/cattle farm in the wilds of Brazil as it allowed them a chance to live out their cowboy, and cowgirl for Gunhild Seljenes, fantasies. There are many shots of the team sporting new cowboy hats, riding horseback and always dangling a cigarette from their mouths.

Then there are shots from their trip to Sao Paolo where the team helped out at the Brazilian Narional Barista Competition. They really seemed to have a great time and had nothing but kind words to say of their Brazilian counterparts. It looked like everything you’d want in a trip to that famed country, except for the three hours Einar spent lost in the jungle on horseback. But he said, on the upside, he did have a chance to become very friendly with his pony.