The first thing to notice about Sarimakmur mill is the size, cleanliness and the good organization. We got the full tour. Here are our two guides on the tour Hendri (Left) and Mukfin (right). First receiving area where the “asalan” coffee gets in. Shortly after the “asalan” arrives in white bags it will be dried and put in brown jute bags, ready for sorting. The sorting process at the mill has 4 main stages. First a gravity machine which is shaking the green beans and separating the heavier beans (top quality) from the lighter beans (lower quality). The best beans will then go to a density sorting by air flowing through the beans. Then it is the Sortex machine which sorts by color. After that the beans are handpicked by smiling women at a conveyor band, moving every 2 minutes. Here is Per chatting with the sorters. After this was the long expected cupping of the different varietals that Wahana produces.

At the table was some washed, natural, local processed and the varietals were Long Berry, Toraja, Rasuna, Jantong and Costa. It was surely an educational and exciting cupping and made the circle come together for all we have seen and learned. The favorites on the table were the Long berry and the local processed. 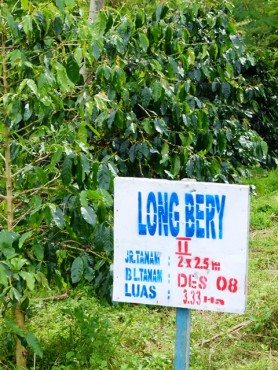 Next up was a fantastic lunch at the Opal Café, where the barista jam also was held. Some 30 baristas showed up. The set up was 4 stations: Per from the Swedish barista team and Mel from Melbourne Coffee Merchants were teaching filter brewing to one group. At another station Anne (team Sweden) and Erin from Valley Edge did an aeropress session. 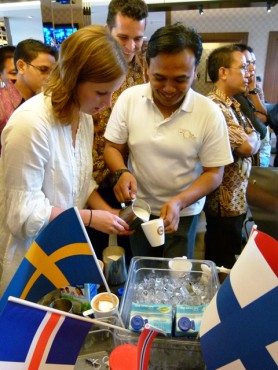 Pernilla (team Sweden) did milk steaming while Alexander is doing an espresso session. The energy in the Opal Café was focused and interactive. The espresso machine was the most popular station. So with time the crowd there became bigger and bigger. Steve from Dimattina Coffee in Perth had a technical go through of an espresso machine while Pernilla took milk steaming to the next level: latte art. This also prepared the baristas to the final part: a latte art throw down. Everybody was allowed to enter the competition. 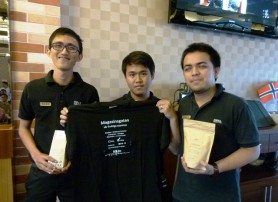 The best three in the competition were 3 baristas from Opal Cafe: Agus (middle) was number one, Koko (left) number 2 and  Haris (right) number 3.