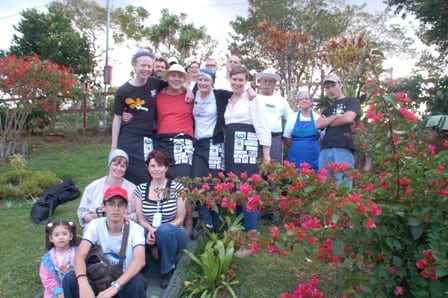 Here we all are, in beautiful Costa Rica… After the entire group had assembled in San Jose, Costa Rica, hailing from Denmark, Estonia and the United States on Saturday, we all relaxed for an afternoon at the pool before heading out in our trusty bus for Nacientes Palmichal, a spectacular ecolodge in Parrillada. Our hosts could not have been more gracious: we are being extremely well taken care of by Flori Marin of Mercanta and Francois Castells of Cafe Noble, whose companies are the generous sponsors of the Danish Barista Team, who won the trip by taking top honors at the Nordic Barista Cup, held in September in Iceland.

Our first official day of the trip was billed as a day of leisure, but we could not wait to see our surroundings. Francois led the group on a challenging hike up the mountain close to Rio Tabarcia, where we were treated to a coffee break, with fresh cheese made right on the farm. This was a delightful farm, with cows, chickens, rabbits, and an admirable sustainable organization, which included worm composting. To thank our hosts, 2009 Danish Barista Champ, Morten, pulled his aeropress from his knapsack and prepared fresh coffee for our hosts. 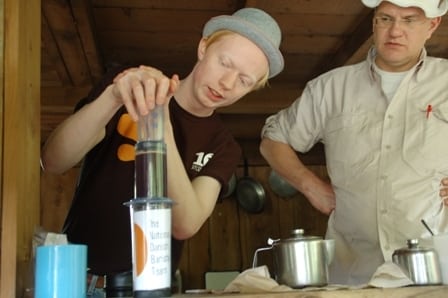 We were taken later to a beautiful spot called Finca Fuentes del Paraiso, which is owned collectively by the brothers who were hosting us. In this lovely spot, we enjoyed a typical Costa Rican lunch, siestas on pads in the shade, swimming in the natural springs, and even soccer.

From there, we headed for Finca cerco don Manuel, where we were taught to make tortillas == and we found that barista champions are fairly proficient at tortilla making… The photo at top is the group assembled in the lovely gardens of Don Manuel.

Back at our ecolodge, we were given an introduction to Asoproaaa, which is a nonprofit association of farmers of coffee and cattle, which provides producing families with an infrastructure they need to purchase houses and earn equity in their communities.

We were up early today, Monday, to spend a full day with the producers of Asoproaaa for an up close look at where coffee goes, from field to cup. We loaded up in four by fours for a rocky hjourney to the top of Finca Bella Vista in Tarrazu, where participants took place in a lively cupping competition. With baskets strapped to their waists, and enduring ferocious winds, the members of the group took to the coffee trees, eagerly grabbing for the reddest cherries. The prize would be a traditional Costa Rican coffee brewer, and everyone had his or her eye on it. At the end of the hour time limit, participants dragged their bags to mbe measured. But in a twist, it turned out that the judges were not looking for quantity so much as qualityª And so Ea, of the Danish team, with her bag of beautiful dark red cherries, won top prize, even though she collected a bit fewer cherries than others. But because her bag contained the fewest green cherries, and no leaves, she was named the winner. She is pictured below in the midst of picking. 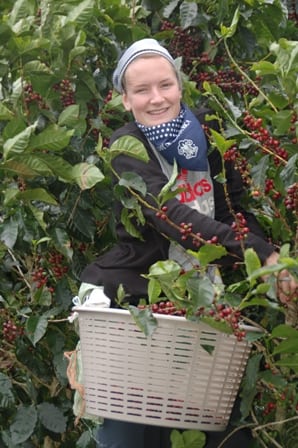 We were taken to the highest peak on the mountain for a lovely lunch on a plateau with spectacular views of the Tarrazu region. And then, we packed up for a trip back down the mountain, stopping at two receiving stations on the way. At the first, we met several coffee producers who were bringing their days haul to be evaluated by an agronomist and measured, and then they were given a check. It was a very special thing to see.

Now we are back at Asoproaaa, cupping coffees. At the close of the cupping, we will meet up with the cherries we picked and watch as they are wet processed and then laid out to dry on the African raised beds that are all around this beautiful mill.´

Lucky for us, there are several Costa Rican baristas, including 2009 champion Auren, who will take place in a barista jam at the end of the day. Following dinner, we will head back to the ecolodge for our final night there.´

Our busy days ahead include visiting an organic farm, as well as delivering a check for ten thousand dollars to the nonprofit, Manos Abiertos in Alajuela. That money represents all that was raised by all the five NBC teams during the even in Iceland in September, and it is truly an honor for the Danish team to be able to present it.

Internet connections continue to be few and far between, but we will do our best to keep the news from Costa Rica coming to you. So please check back often…