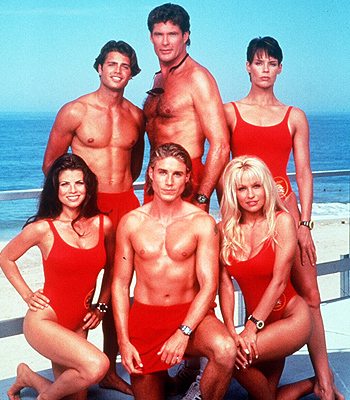 So the second half of the day today was spent at a pool nearby where our huts and cabins are. And yes, there was a theme, as you can probably guess from the above image.

So after everyone had gathered in either the heated pool or the three giant spas (and yes, there was even a big, old water slide), a whistle blew, the theme from Baywatch started over the loudspeakers, and running over the hill came Toné, Tim, Alex and David Hasselhoff, or nearly so anyway.

Each of the teams were then put to the test, swimming relay races, performing synchronized swimming and generally having a blast while being hugely entertaining.

Check out some pics below!

A relay race where teams had to carry small cups of water across the pool to fill a bottle.

The Norwegian pool party challenge hosts show the national teams how it's done!

The attendees watch the hilarity from the comforts of some huge hot tubs.

It's the Swedish Barista Bikini Team!

Should anyone be surprised when the Norwegian Team sets their swim to A-ha?

Team Finland had a vampire themed synchro. They admitted afterwards it worked better in theory than practice.

By the end of the event, Team Finland had proven themselves better suited to the life aquatic than their competitors, and they won the most points.

Now we’re back at camp having dinner and will soon find out who won the day.