Welcome To The Nordic Barista Cup 2006! 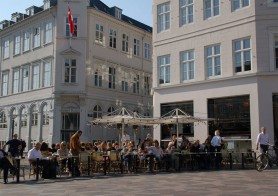 This is where it all began in 2003. The Danish capital city proudly served as the host locale of an unprecedented challenge between longstanding rival countries Denmark and Norway. Only at this competition, unlike ages past, the battle would be waged with coffee, espresso, to be specific.

The event was smaller back then but the intent was as it is today and will remain in the future: to foster community among professional baristas, to encourage the mastery of teamwork in an effort to further the expertise and craftsmanship of the barista, to share ideas and do away with any secrecy that may have hindered coffee professionals’ mutual development in the past, effectively bringing to the forefront a transparency meant to benefit every person along the global chain of coffee, from producers to roasters to baristas.

At the Nordic Barista Cup (NBC), the only rule is that there are no rules. Each year, the host country organizers determine the activities for the three-day event, from the specificities of the competitions, to the themes for evening parties and dinners, to sight-seeing excursions. After the initial event, the NBC expanded to include teams from all five Scandinavian countries: Norway, Denmark, Finland, Sweden, and Iceland. Each national team is comprised of four baristas and one team coach. The fact that the teams compete with each other over the course of the event, however, does not exclude attendees from participating; in fact, attendees are involved throughout the entire event as participants as opposed to mere spectators.

If there is an overriding theme to the Nordic Barista Cup, it is one of sharing and learning. Rather than harbouring secrets about their techniques and knowledge of coffees, baristas at this event are encouraged to impart their wisdom to others, as well as to thoughtfully consider the opinions of their peers. The Nordic Barista Cup organization believes that the best baristas are intrinsically artistic, which means that no matter the similarity of the tools they use, each will bring a different sensibility to the coffees they prepare. In that way, the act of sharing can only expand the vision that a barista brings to his or her work.

Though five teams compete in the NBC, there is only one overall winner of the event. This was determined by the Nordic Barista Cup Board as a way to empower all teams as either first or collective second-place winners. For the record, Norway won in 2003; Denmark won in 2004; and Norway once again took top honors in 2005. However, taking the prize really isn’t the point of the NBC. Unlike traditional barista competitions, all baristas at the NBC return home feeling like winners: they have gained knowledge, they have made new friends, and they have participated in one of the most innovative, community-centric, and of course fun coffee events in the world.
What’s so fun about it, you ask? In Iceland in 2004, for example, one challenge found the barista teams at a dairy farm, where they were instructed to milk a cow into a steaming pitcher, run the pitcher over to a home espresso machine set up nearby, and make a cappuccino. In Norway in 2005, teams participated in a kind of coffee Jeopardy! game, complete with a Vanna White impersonator revealing the answers, and an MC keeping the game lively as attendees looked on with amusement.

Who knows what’s in store for teams and attendees at this year’s Nordic Barista Cup in Copenhagen — all details about competitions and party games are kept under wraps until the last minute in an effort to encourage an atmosphere of spontaneity, team skill building, and enjoyment of the moment at hand.

The Nordic Barista Cup is an event like no other — we wish you could be here to join us! But in your absence, we will update this website with news about each day’s events as they happen, as well as profiles of teams, sponsors and attendees. The goal of the NBC is not only to promote community within the event itself, but to encourage baristas around the world to plan and engage in similar events in an effort to build a stronger, better, and more transparent specialty coffee industry for us all.

So join us here for more news, people and reports on the inevitable crazy happenings. We hope it will inspire you to embrace your craft as baristas just as it has and will continue to for all of us at the Nordic Barista Cup.
Skål!