This guy is so awesome. Luis Rodriguez is a trailblazer for producing countries in his passion for the barista craft. Hailing from the Salvadoran Coffee Council, Luis is fresh from some travel in the United States – he attended the SCAA’s Roasters Guild Retreat, after which he spent some time with his friends at Intelligentsia Coffee Roasters ion Chicago, Ill., where he discussed coffee production with consumers and wholesale customers, as well as with the Intelly staff. 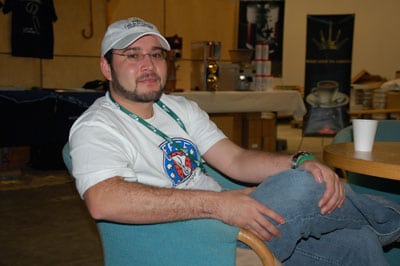 Now he’s made the trip to Copenhagen to represent Café de El Salvador as a sponsor of the Nordic Barista Cup in an effort to promote transparency from his producing region through to the baristas in attendance at this event. And he’s doing a fine job of it.

Luis presented attendees and barista teams with an informative lecture on coffee production in El Salvador, beans from in increasingly high demand among some of the top coffee professionals in the world. It should be noted that World Barista Champions Matthew Riddle (Intelligentsia) and James Hoffmann (La Spaziale) both used El Salvadoran beans in their blends.

During his lecture, Luis shared some astounding facts about the coffees of El Salvador, such as 68 percent Bourbon variety, and 29 percent grown is Pacas, which is a natural mutation of Bourbon. Coffee was introduced to El Salvador in 1740, but more interesting is the fact that in the 1970s, El Salvador ranked fourth worldwide in coffee exportation, an – hang onto your hats – first in productivity! 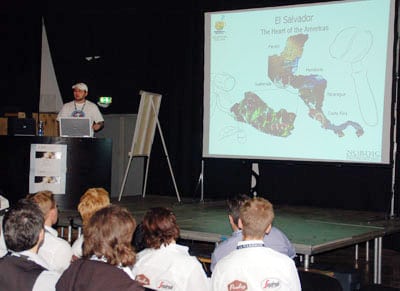 “For us, working with baristas and doing more training with the people producing our coffee has been so (beneficial) and important,” he told the audience. Luis revealed to the crowd that the Salvadoran Coffee Council is in the process of opening a barista and coffee school to further their efforts.
Four of the most sought-after prizes in the silent auction taking place throughout the Nordic Barista Cup is spots to accompany the winning team at this year’s Nordic Barista Cup to El Salvador on a trip to the first-ever El Salvador Barista Championship. Starting bid is 1000 Euro, and bidding – especially after Luis’ engaging discussion of the beautiful coffees of El Salvador – is getting fierce!
—Sarah Allen