It’s almost the end of day two and the teams have gathered to hear the announcement of today’s winner. It’s a little odd that the winner will be announced before the final competition of the evening, but the teams don’t seem to mind. I think they’re feeling like it will take a little pressure off of them if they already know who has won the day. (And apparently it did as the day’s winner was smoked in the last competition of the evening. See post above for more detail.)

Unlike Day 1, there is no tie for first place. After the water tasting competition, which the winner excelled in, it was simple for the judges to choose the day’s victor. They do note, however, that though the team excelled in the formal competition aspect of the day’s event, what really makes the day’s winner stand out was the respect, humor and good spirit they showed to each other and as a team. They really have the team spirit. “They work so well together, it’s like they’re not working at all,” the judges’ spokesman, Tim Wendleboe quipped.

The teams, all anxious, huddle around each other, as Wendleboe performs his own drum roll, and the winner is: a long, long pause – Denmark! The home country team jumps for joy and exchanges hugs all around. 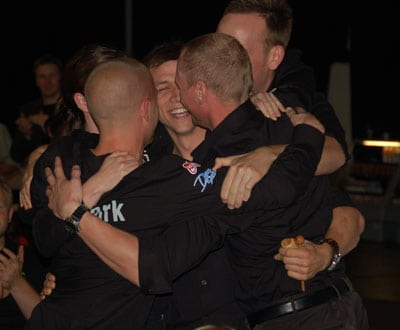 Then they’re called on stage for another surprise. As the winners of Day 2, each member of the team is awarded a Certificate of Awesomeness, presented by Barista Magazine, which carries along with it a year’s subscription.
“Awesome to the max!” exclaims Klaus Thomsen, and really, who can argue with that? 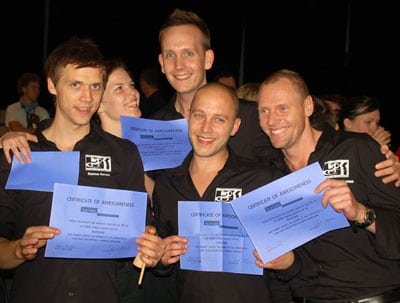