Catching up with Clover

Some of you may remember the lovely Polish barista and café owner Joanna (Asia) Grzybowska who graced the cover of the February/March 2006 issue of Barista Magazine. Joanna has spent the last few months working as a barista at Kaffitar in Iceland, and is sincerely one of the most enthusiastic coffee professionals around. 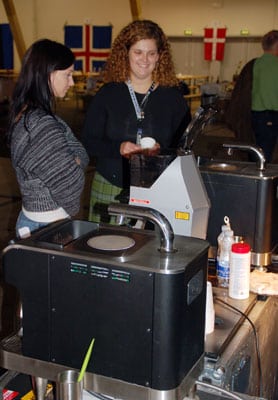 But she’s a tough customer. She expects a lot from her coffee and equipment, and she approached Zander’s Clover (the revolutionary by-the-cup brewing machine developed by Seattle-based Coffee Equipment Company) presentation with high expectations. And at the conclusion, she was anything but disappointed. “He presented the story of the Clover with such personal elements, such stories that I could relate to,” Joanna said. She was referring to the earnest intensity Zander cannot help but communicate when he discusses his engineering background which he has focused on the equipment, the extensive market research that the Coffee Equipment Company engaged in while developing the popular brewing machine, and the passion for coffee – for really, really great coffee – he and his colleagues at Coffee Equipment Company have. “We wanted to come to (the Nordic Barista Cup) because from what we had heard, it would have a high density of very serious coffee people, and so far, that’s been very true,” Zander said. “The educational opportunities for them and for us are just incredible. You miss all that at (larger) conventions and trade shows. It’s harder to maintain the educational focus. But here, the opposite it true.” 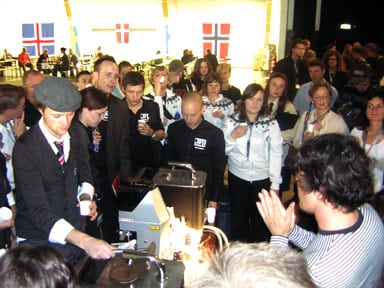 Is it any wonder that Clovers have been selling like crazy here? —Sarah Allen